Thomas was born and raised in Reinbeck Iowa.  His parents still live near Waterloo.  His oldest brother is married with two boys and lives in Glenwood.  His second older brother lives in Des Moines.

Thomas’s wife, Hannah, grew up in Fort Wayne, Indiana where her father attended seminary and then Spencer, Nebraska where he was called, and eventually to Kingsley, Iowa where her parents currently live.  Her older sister as well as her older brother and his wife live in Des Moines.

Both Thomas and Hannah have many other relatives who live in Iowa as well.  They are very excited to be called back home to serve so close to their family.

Thomas and Hannah both attended the University of Northern Iowa.  They first met while attending services and activities at College-Hill Lutheran Church.  Thomas graduated in May of 2013 and Hannah will be graduating this summer.  He began his seminary studies at Concordia Theological Seminary, Fort Wayne the summer of 2013. 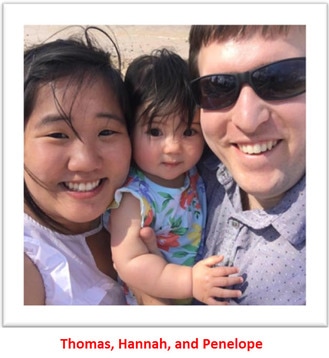 Thomas graduated from Concordia Theological Seminary
in Fort Wayne, IN on May 19, of 2017.

Thomas was ordained and installed on June 25, 2017 to begin serving Christ's people at both St. John's and Trinity Lutheran Churches .